A Regular Expression Engine in Python 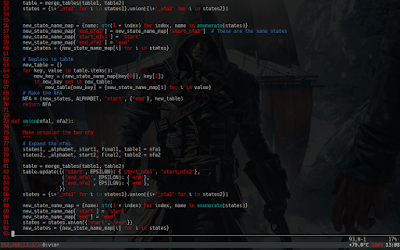 Code is here
Regular expressions are quiet useful in programming tasks. They are a useful method to search for patterns in long strings of text. For example the pattern "(c|b)at" allows us to search for either 'cat' or 'bat' in any string that this pattern is run over. This example was a simple one and regular expressions in practice are far more powerful and complex.

One must take care however in remembering that regular expressions are a loaded mathematical term. They are not the same as regex and regexp since those two do not make regular languages.

Here, for the sake of brevity we shall call regular expressions regex. Regexes are usually made using Deterministic Finite Automatons. They take a string of input symbols and tell us if the DFA accepted the symbol string or not. Such an activity is called the run of the DFA.

For the regex '0|10*' (which means either a zero or one followed by any number of zeros) on the alphabet '01' the following strings return results as shown:
The entire code is available as a gist.