Taking a Look at Competitive Programming

Competitive programming is a lucrative business if you have the chops for it. It has however been subject to little analysis AFAIK. This has partially been because of the unavailability of consolidated data set to facilitate this. To resolve that I scraped together data from the Codechef website amounting to a little over 1 million programs submitted to the site. You can get the dataset on Kaggle (link to data).

Build an agent to win online programming competitions. A program that can write other programs would be, for obvious reasons, very powerful.

To solve a problem, the first step is always to understand the problem and know it's quirks. This blog post is possibly the first of many exploring this dataset with the ultimate aim of being able to generate a solution program given the statement of the problem.

An Exploratory Data Analysis has been done by Swaraj Khadanga. You can see it at Simple EDA.

A brief description of the data

The dataset presents a table with columns as variables and rows as observations, making it tidy in the process. The columns we are interested in are:

This visualization makes some assumptions, namely:
We plot the points at the calculated coordinates and color them by the problem they were trying to solve. By doing this we arrive on a graph which is shown below. 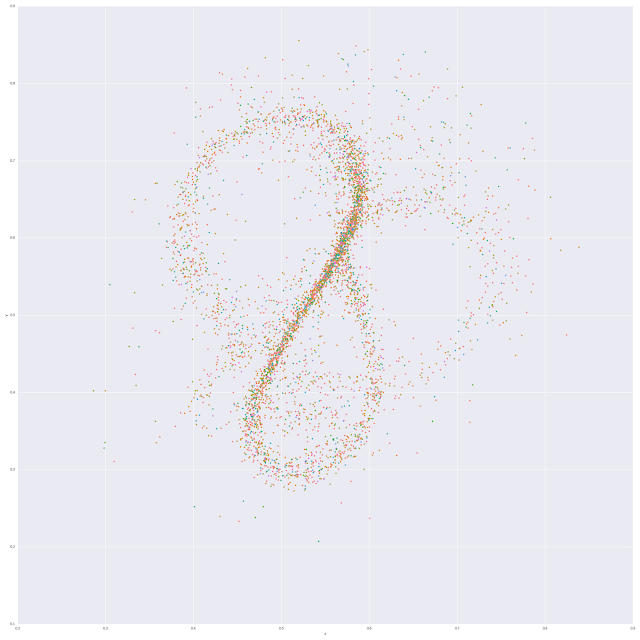 All I can say at this point is that it's interesting. The X and Y represent nothing of significance. What is significant is the relative distances between the points. Most programs are of a similar structure with very few actually differing a lot from each other.
There will be more on this in later posts. The plot was created using this gist.