The Terminal - (Not the Movie)

"Ah, you think that a GUI is your ally? You merely adopted the GUI. I was born in it, molded by it. I did not see a terminal until I was already a man, by then it was nothing to me but blinding." - the difference between now and then. 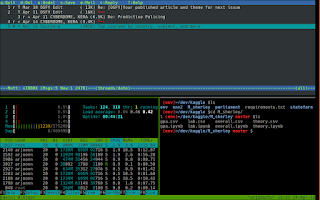 As mentioned, I was born in 1994, and computers already had GUI by that time. Ever since I was introduced to computers, all I knew was the GUI. That had, as aptly said, defined my computer using habits. I was dependent on the mouse, I needed WYSIWYG editors and so on. Not that they are a bad thing, but they made the computer a black box for me.In college I was introduced to the command line and that gave way to a whole new experience.

This article is about how I finally embraced the terminal and started my life inside of it. As of now, I have completely un-installed the X server on my Archlinux installation and currently only have the terminal. Note that this is a TTY and not a terminal emulator like terminator and xterm.

Some of the things I had to introduce in my life to make this easier were:
These things have made life a lot simpler. The terminal also streamlines your thought process a lot. Though it is a little tough initially, since our daily experience is so enriched by graphics, after a while you begin to see the effects.

First off you miss the desktop. With nothing to see, you need to constantly be aware of where you are in the computer and what you want to do. That said, it takes away a lot of distraction by removing the oh-so-good movies folder from your sight.

With the Desktop gone, the file explorer is the next thing that is missed. This bit of tech had us in binds, making exploring as easy as point and click. It does however mask some things in the file system which we would have been better off knowing.

The next thing which hurts us is the browser. Firefox, Chromium and so on are all graphical browsers. We have given all of that up for the sleek, powerful and ad-free environment of terminal based browsers. Keep in mind that the image displaying powers of w3m also do not work as the X server has been removed.

Images and videos do not work. Obviously! That puts a hitch in our world, sure does.  VLC media player to the rescue. Turns out that VLC has a ASCII mode where it can display images and videos as painted by ASCII characters. Here is an example. 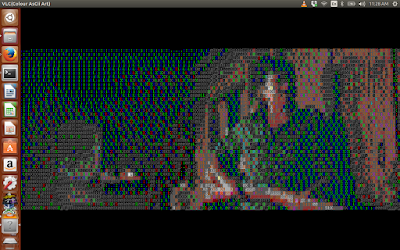 Best of all it works in the TTY too. That takes care of seeing a few short tutorials without the X server involved. Do take care though that you are using tmux when you are doing this as it takes over the TTY when a video is run, not allowing you to Ctrl-C it or close it in any other manner (AFAIK).
Another thorn in the side is research papers which are usually PDF files. Pandoc comes to the rescue by allowing us to convert between files. I use another utility called pdftotext.
When professors ask you to give a presentation on some topic, you begin to miss the old PowerPoint. In hindsight though, as Uncle Ben said "With great power comes great responsibility". PowerPoint makes it easy to obscure the message and deliver nothing at all. I have begun using MDP to provide presentations from the terminal itself.
With the browser gone, Gmail and Facebook has been cut off too. Although LYNX provides a decent web browsing experience, the lack of Javascript shows. For email I have started using MUTT and for Facebook, well let's just say that ship has sailed.
With the browser went the ability to use Jupyter notebooks. And so we come to our last program which helps ease the terminal life (pun probably intended). GNUPLOT let's us plot graphs in text mode, allowing us to get a general idea of what the data is like. Of course it is nowhere near the full capability of GNUPLOT but it gets the job done.
And so our life in the terminal is now rolling and work is so much more easier because of it.