I was perusing https://data.gov.in once more and my thoughts turned back to my home state of Rajasthan. A quick search revealed that the site does indeed host data on Rajasthan (see this).

We take up the motor vehicle registration data provided on the site and immediately discover that like all the data on the site, this dataset is not prepared for consumption. We shall have to perform some data cleaning.

A few Excel copy pastes later we have a single file which I've put up on my Google Drive here.

With that I loaded this stuff into a Jupyter notebook and got this neat plot as the end product of some nifty manipulations.  The entire notebook is available here (I'll upload this soon).

First let's take a look at the New Registrations in every vehicle Type over the years. 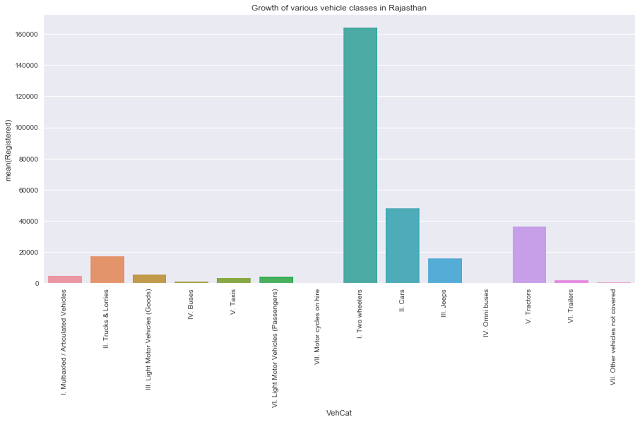 Everyone seems to be buying two wheelers in Rajasthan! Cars and Tractors are the next big wigs but they stand no where close to where two wheelers are.

Irrespective of vehicle class, there is growth in motor vehicles in Rajasthan as can be seen in this Point plot. We can see that what has caused the explosion in vehicle numbers is within the non-transport class of vehicles.

We can see that it's just one outlier which has caused this boost! What is that? We know that it has always been high in registrations. It's probably the motorcycles. It's curious that the total shoots up so quickly in 2012 but the growth is generally increasing. Let's see if the data has mistakes in it. We plot the total counts reported over the years and then we plot the cumulative sum of the new registrations. 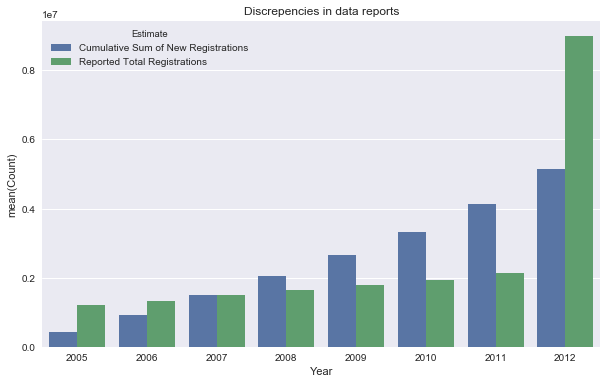 That's strange.
New registrations for a year should contribute to the next year's total. Since we don't have data before 2005, we should expect the difference between reported numbers and expected numbers to be constant.
That difference changes. It changes abruptly in 2012 going from massively underreported to over reported. An effect of the Aadhaar card wherein people suddenly started reporting unregistered vehicles? Perhaps vehicles came in from other states. I don't know if that is counted as a new registration or not. It's either that or our government is bad at reporting / collecting statistics.